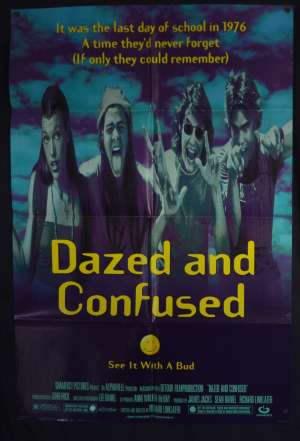 Dazed and Confused is a 1993 American coming-of-age comedy film written and directed by Richard Linklater. The film features a large ensemble cast of actors who would later become stars, including Jason London, Ben Affleck, Renée Zellweger, Matthew McConaughey, Milla Jovovich, Parker Posey and Adam Goldberg.The plot follows various groups of Texas teenagers during the last day of school in 1976.In 2002, Quentin Tarantino listed it as the 10th best film of all time in a Sight and Sound poll. It ranked third on Entertainment Weekly magazine's list of the 50 Best High School Movies. The title of the film is derived from Led Zeppelin's version of the song of the same name. Critically the film was well received and has since enjoyed a huge cult following. The line "alright, alright, alright" became a catchphrase for Matthew McConaughey. Poster is Printed in the USA N.S.S. #930134