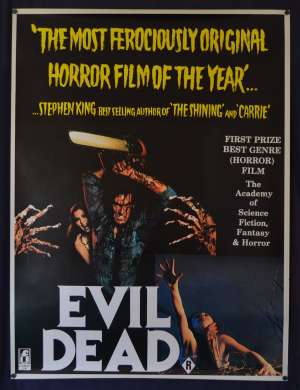 Evil Dead is an American horror film franchise created by Sam Raimi consisting of four feature films and a television series. The series revolves around the Necronomicon Ex-Mortis, an ancient Sumerian text which wreaks havoc upon a group of cabin inhabitants in a wooded area in Tennessee (later confirmed to be Elk Rapids in Michigan).The protagonist, Ashley Joanna "Ash" Williams (Bruce Campbell) is the only character to appear in every instalment of the original trilogy, with the exception of his main love interest Linda, who appears in Army of Darkness during only the prologue. The original trilogy includes The Evil Dead (1981), Evil Dead II (1987), and Army of Darkness (1992), all written and directed by Raimi, produced by Robert G. Tapert, and starring Campbell. ‘Massacre at Central High’ and ‘Revenge of the Cheerleaders’ were two films that inspired the makers of the film. Made on a very low budget, Evil Dead now enjoys a huge cult following amongst the Horror genre.