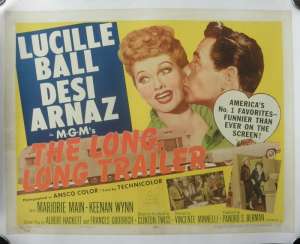 The Long Long Trailer 1954 Half Sheet Poster Lucille Ball Desi Arnaz | Lucille Ball and Desi Arnaz were at the height of their TV fame when they were contracted by MGM to make two feature films. This was the first of the two films and featured Lucy and Desi as newlyweds, who buy an enormous house trailer, so they can live together while Desi's job takes him around the country. Audiences were seeing the comedic duo every week for free on television, but just couldn't get enough, and the film went on to become a smash hit at the box-office.