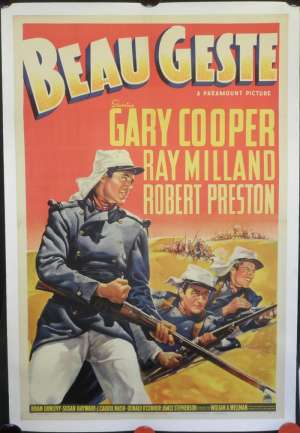 USA One Sheet Poster.Beau Geste is a 1939 Paramount Pictures action/adventure film starring Gary Cooper, Ray Milland, Robert Preston, Brian Donlevy, and Susan Hayward. Directed and produced by William A. Wellman, the screenplay was adapted by Robert Carson, based on the 1924 novel of the same title by P. C. Wren. The music score was by Alfred Newman and cinematography was by Theodor Sparkuhl and Archie Stout. The film is a virtual scene-for-scene remake of the 1926 silent version of the same title starring Ronald Colman. This is probably the best known adaptation. The film was banned in parts of Canada out of respect for the French government.The film was banned by the fascist authorities in Mussolini's Italy on the grounds that it portrayed the British too positively, and it was feared that because Britain was a democracy the film would correspondingly serve to undermine fascist ideology. Brian Donlevy was nominated for the Academy Award for Best Supporting Actor for his role in the film.