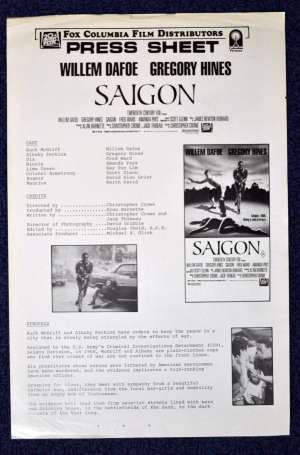 Original 2 page Movie Press Sheet. Off Limits (Saigon) is a 1988 action-thriller film set during the Vietnam War starring Willem Dafoe and Gregory Hines and directed by Christopher Crowe. The term "off limits" referred to the area where the original crime took place, an area of Saigon off limits to military personnel. The name of the film was changed to Saigon or Saigon: Off Limits when it was released throughout the rest of the world. The film marks Willem Dafoe's second Vietnam War movie. He was assisted in preparing for this role by Vietnam Veteran and former Counterintelligence Special Agent Ed Murphy. Dafoe had previously starred in Platoon and would go on to play roles in Born on the Fourth of July and Flight of the Intruder.