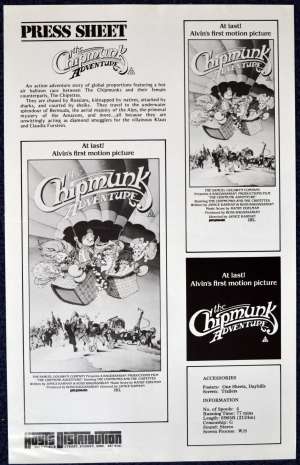 Original Movie Press Sheet.The Chipmunk Adventure is a 1987 American animated musical adventure comedy film featuring the characters from NBC's Saturday morning cartoon Alvin and the Chipmunks. The film, directed by Janice Karman and written by Karman and Ross Bagdasarian, stars the voices of Karman, Bagdasarian, and Dody Goodman,& follows the Chipmunks and the Chipettes as they go on a hot air balloon race around the world that is the cover for a diamond smuggling ring.