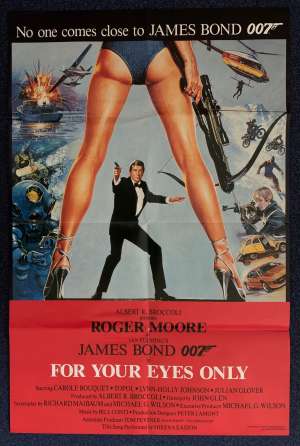 Original Australian Promotional Movie Poster For Your Eyes Only

Rarely seen promotional Movie Poster with cool artwork by Brian Bysouth.For Your Eyes Only is a 1981 spy film and the twelfth in the James Bond series produced by Eon Productions, and the fifth to star Roger Moore as the fictional MI6 agent James Bond. It marked the directorial debut of John Glen, who had worked as editor and second unit director on three other Bond films. The screenplay by Richard Maibaum and Michael G. Wilson takes its characters and combines elements from the plots from two short stories from Ian Fleming's 1960 For Your Eyes Only collection: the title story and "Risico". In the plot, Bond attempts to locate a missile command system while becoming tangled in a web of deception spun by rival Greek businessmen along with Melina Havelock, a woman seeking to avenge the murder of her parents. Some writing elements were inspired by the novels Live and Let Die, Goldfinger and On Her Majesty's Secret Service. After the science fiction-focused Moonraker, the producers wanted a return to the style of the early Bond films and the works of 007 creator Fleming. For Your Eyes Only followed a grittier, more realistic approach and a narrative theme of revenge and its consequences. The film was a financial success, generating $195.3 million worldwide and reviewers today praise its more serious tone.