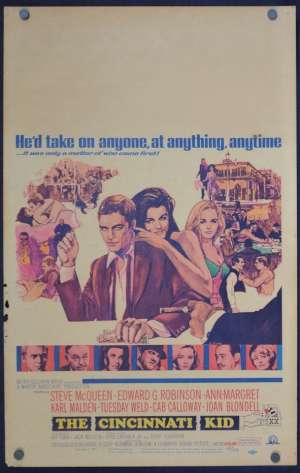 Great Bob Peak poster artwork.The Cincinnati Kid is a 1965 American drama film. It was directed by Norman Jewison and stars Steve McQueen in the title role and Edward G. Robinson as Howard. Spencer Tracy was originally cast as Howard, but ill health forced him to withdraw from the film. Jewison replaced original director Sam Peckinpah shortly after filming began and considers it the film that allowed him to transition from the lighter comedic films he had previously been making and take on more serious films and subjects. The film tells the story of Eric "The Kid" Stoner, a young Depression-era poker player, as he seeks to establish his reputation as the best. This quest leads him to challenge Lancey "The Man" Howard, an older player widely considered to be the best, culminating in a climactic final poker hand between the two. The film features a theme song performed by Ray Charles. The film garnered mixed reviews from critics on its initial release but of more recent times critics have cited McQueen was "effortlessly watchable as the Kid, providing a masterclass in the power of natural screen presence over dialogue" and Robinson "simply fantastic." Supporting actors Robinson and Joan Blondell earned award nominations for their performances.