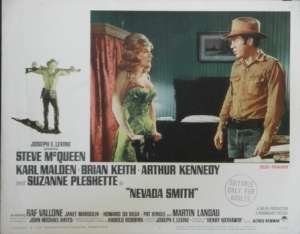 Nevada Smith is a 1966 American Western film in Eastmancolor and Panavision directed by Henry Hathaway and starring Steve McQueen. The film was made by Embassy Pictures and Solar Productions, in association with and released by Paramount Pictures. The movie was a prequel to the novel by Harold Robbins, The Carpetbaggers, which had been made into a highly successful film two years earlier, with Alan Ladd playing McQueen's part as an older man. The supporting cast of Nevada Smith comprises Karl Malden, Brian Keith, Martin Landau, Arthur Kennedy, Suzanne Pleshette, Pat Hingle and Paul Fix.