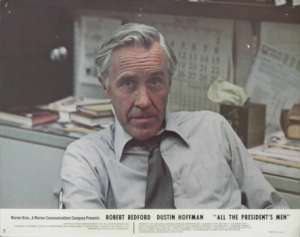 Original 11x14 USA Lobby Card. All the President's Men is a 1976 American political thriller film directed by Alan J. Pakula. The screenplay by William Goldman is based on the 1974 non-fiction book of the same name by Carl Bernstein and Bob Woodward, the two journalists investigating the Watergate scandal for The Washington Post. The film starred Robert Redford and Dustin Hoffman as Woodward and Bernstein, respectively; it was produced by Walter Coblenz for Redford's Wildwood Enterprises.