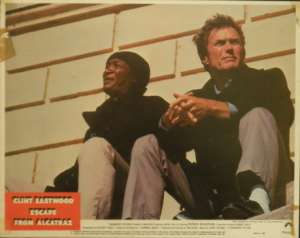 Escape from Alcatraz is a 1979 American prison thriller film directed by Don Siegel.It is an adaptation of the 1963 non-fiction book of the same name by J. Campbell Bruce and dramatizes the 1962 prisoner escape from the maximum security prison on Alcatraz Island. The film stars Clint Eastwood, and features Patrick McGoohan, Fred Ward, Jack Thibeau and Larry Hankin. Danny Glover appears in his film debut. Escape from Alcatraz marks the fifth and final collaboration between Siegel and Eastwood, following Coogan's Bluff (1968), Two Mules for Sister Sara (1970), The Beguiled (1971) and Dirty Harry (1971). Alcatraz was closed shortly after the true events on which the film was based. The dangerous escape down the prison wall and into the water was performed without stunt doubles by Eastwood, Fred Ward, and Jack Thibeau, who had both been cast partly for their athleticism. Director Siegel twice thought they had been lost to the treacherous currents. Escape from Alcatraz was well received by critics and is considered by many as one of the best films of 1979.