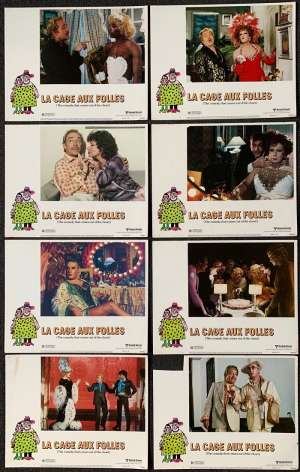 USA Lobby Card Set with Lou Myers art.La Cage aux folles ([la kaʒ o fɔl], "The Cage of Madwomen") is a 1978 Franco-Italian comedy film and the first film adaptation of Jean Poiret's 1973 play La Cage aux Folles. It is co-written and directed by Édouard Molinaro and stars Ugo Tognazzi and Michel Serrault. The film's title is the name of a nightclub run by a pair of homosexuals, one of whom has a son about to marry the daughter of a respectable official. Some very funny stuff occurs when they decide to become 'respectable' themselves. Based on the play by Jean Poiret.As of 2020, La Cage aux Folles has remained the no. 11 foreign-language film released in the United States of America. The film was the second highest-grossing film of the year in France with 5,406,614 admissions. In Germany, it received 2.65 million admissions, making it the 11th highest-grossing film of the year. Critically it won 3 Academy Awards.