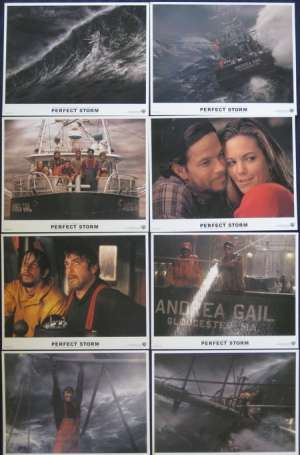 The Perfect Storm Lobby Card Set George Clooney | In October 1991, a dying tropical hurricane from Bermuda collided with a cold front from the Great Lakes, resulting in a "perfect storm" of previously unknown destructive impact that resulted in 100-foot waves; tragically, the crew of a fishing boat was lost in the midst of the fearsome storm. Based on the best-selling book by Sebastian Junger, The Perfect Storm tells the story of the ship's brave and hard-working crew. Billy Tyne (George Clooney), captain of the Andrea Gail, hasn't had much luck finding catch on his most recent trips to sea, and with money short, he and his crew -- Bob Shatford (Mark Wahlberg), Dale Murphy (John C. Reilly), and David Sullivan (William Fichtner) set out again when they hear that the fish are running. Billy's hunch proves correct, but when the ship's refrigeration system goes haywire, they have to return to shore as quickly as possible before the fish spoil, sending them into the middle of the worst storm in history. The supporting cast includes Mary Elziabeth Mastrantonio, Diane Lane, Bob Gunton, and Karen Allen; Wolfgang Petersen, whose breakthrough film was the aquatic wartime drama Das Boot, directed.