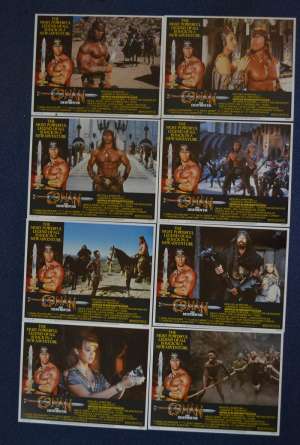 Original USA Lobby Card Set 11 x 14 Conan The Destroyer Arnold Schwarzenegger. Based on a character created by Robert E. Howard, this fast-paced, occasionally humorous sequel to Conan the Barbarian features the hero (Arnold Schwarzenegger) as he is commissioned by the evil queen Taramis (Sarah Douglas) to safely escort a teen princess (Olivia D'Abo) and her powerful bodyguard (Wilt Chamberlain) to a far away castle to retrieve the magic Horn of Dagon. Unknown to Conan, the queen plans to sacrifice the princess when she returns and inherit her kingdom after the bodyguard kills Conan. The queen's plans fail to take into consideration Conan's strength and cunning and the abilities of his sidekicks: the eccentric wizard Akiro (Mako), the wild woman Zula (Grace Jones), and the inept Malak (Tracey Walter). Together the hero and his allies must defeat both mortal and supernatural foes in this voyage to sword-and-sorcery land.