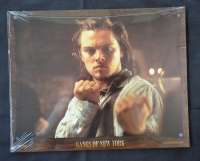 Gangs Of New York Lobby Card Set| The violent rise of gangland power in New York City at a time of massive political corruption and the city's evolution into a cultural melting pot set the stage for this lavish historical epic, which director Martin Scorsese finally brought to the screen almost 30 years after he first began to plan the project.