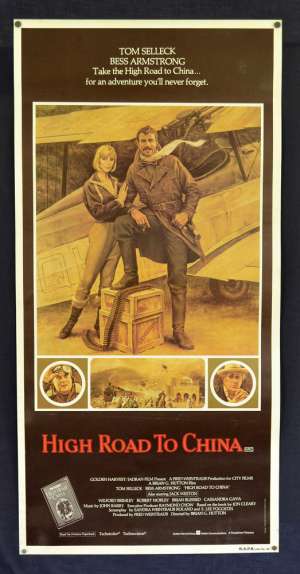 Awesome Morgan Kane poster artwork. High Road To China (a.k.a. Raiders of the End of the World) is a 1983 American adventure-romance film set in the 1920s starring Tom Selleck in his first major starring role along with Bess Armstrong and Wilford Brimley. While Brian G. Hutton ended up as the final director, originally, High Road to China was helmed by John Huston, before being replaced by Sidney J. Furie. In early development, the film was slated to star Roger Moore and Jacqueline Bisset under the direction of John Huston. The musical score was composed by John Barry. It was the 27th highest-grossing film of 1983, bringing in $28,445,927 at the domestic box office. High Road to China was nominated for the 1984 Saturn Award as Best Fantasy Film, while Bess Armstrong was nominated as Best Actress at the Academy of Science Fiction, Fantasy & Horror Films Festival.