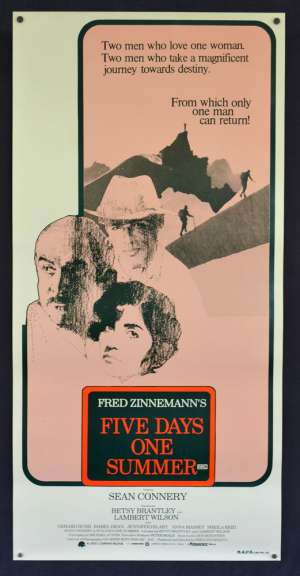 Five Days One Summer is a 1982 American drama film directed by Fred Zinnemann and starring Sean Connery. It was the last film that Zinnemann directed. The storyline is as follows: Douglas Meredith (Sean Connery), a middle-aged Scottish doctor is on vacation in the Alps in 1932 with a young woman, Kate (Betsy Brantley), whom he introduces as his wife. Douglas has brought Kate to the Alps for a mountain climbing trip. Douglas and Kate are absorbed with a psychological melancholy. Through flashbacks, it is revealed that Kate has been in love with Douglas since she was a little girl and that she seduced him away from another woman. The flashbacks also reveal that Kate is not his wife, but his niece. But then, in their mountain retreat, climbing guide, Johann Biari (Lambert Wilson), appears and he develops an attraction for Kate.