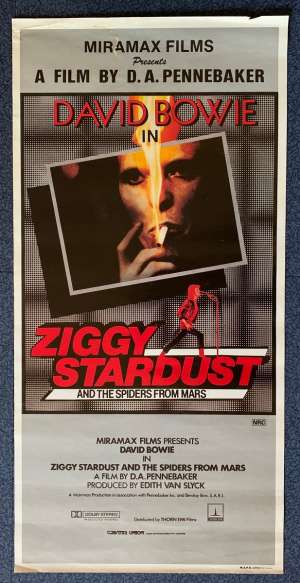 Daybill Poster.Ziggy Stardust And The Spiders From Mars was sometimes called Bowie 1973.This film was a 1973 documentary and concert film by D.A. Pennebaker. It features David Bowie and his backing group The Spiders From Mars performing at the Hammersmith Odeon in London on 3rd July 1973.The full-length 90-minute film spent years in post-production before finally having its theatrical premiere at the Edinburgh Film Festival on 31 August 1979. In 1983, the film was finally released to theatres worldwide, corresponding with the release of its soundtrack album entitled Ziggy Stardust: The Motion Picture.