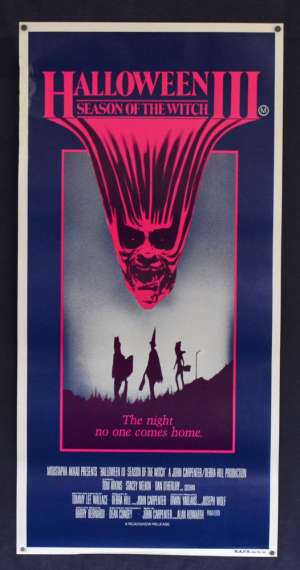 Halloween III: Season of the Witch is a 1982 American science fiction horror film and the third instalment in the Halloween film series. It is the first film to be written and directed by Tommy Lee Wallace. John Carpenter and Debra Hill, the creators of Halloween, returned as producers. Halloween III is the only entry in the series that does not feature the series antagonist Michael Myers, nor does it include story elements from either Halloween (1978) or Halloween II (1981). In fact, it treats the first film and, apparently, its sequel as fictional films, as one of the characters watches a trailer for the original during the film; additionally, the film's tagline is a reference to the tagline from the original as well. It also departs from the slasher genre which the first two instalments were part of instead featuring a "witchcraft" theme. Halloween III grossed $14.4 million at the box office in the United States. Over time Halloween III has gained a new legion of fans & established its reputation as a stand alone cult film.