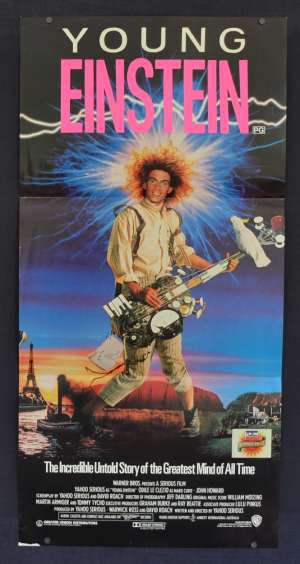 Daybill Poster.Young Einstein is a 1988 Australian comedy film written, produced, directed by and starring Yahoo Serious. It is a fantasized account of the life of Albert Einstein which alters all people, places and circumstances of his life, including relocating the theoretical physicist to Australia, having him splitting the atom with a chisel, inventing rock and roll and surfing. It was highly successful in Australia winning an award from the Australian Film Institute Awards. On release in Australia, it became the fifth biggest opening in Australian film history behind "Crocodile" Dundee and its sequel, Rocky IV and Fatal Attraction.