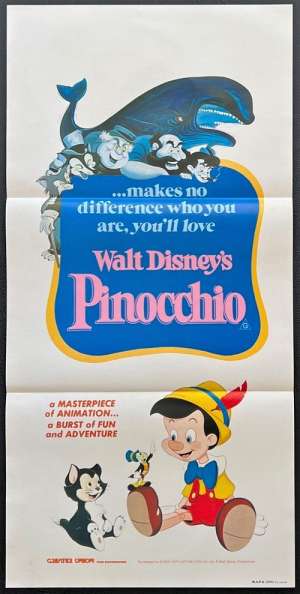 Daybill Poster 1982 Re-issue.Pinocchio is a 1940 American animated musical fantasy film produced by Walt Disney Productions and based on the Italian children's novel The Adventures of Pinocchio by Carlo Collodi. It was the second animated feature film produced by Disney, made after the success of Snow White and the Seven Dwarfs (1937). It was the first animated feature to win a competitive Academy Award – winning two for Best Music, Original Score and for Original Song for "When You Wish Upon A Star", however the film was initially a box office disaster. It eventually made a profit in its 1945 reissue, and today it is considered among the finest Disney features ever made, and one of the greatest animated films of all time.