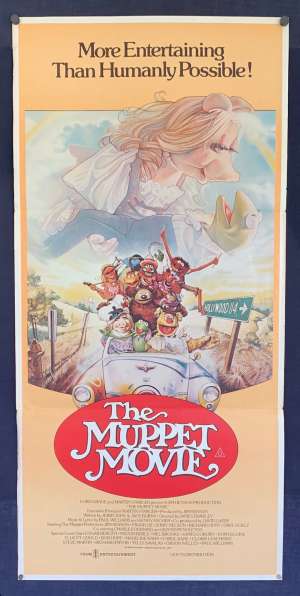 Daybill Poster.The Muppet Movie is a 1979 musical road comedy film and the first theatrical film featuring the Muppets. Directed by James Frawley and produced by Jim Henson, the film's screenplay was conceived by The Muppet Show writers Jerry Juhl and Jack Burns. Notable for its surreal humour, meta-references and prolific use of cameos, The Muppet Movie was released in the United Kingdom on May 31, 1979 and in the United States on June 22, 1979, and received critical praise; including two Academy Award nominations for Paul Williams and Kenneth Ascher's musical score and their song, "The Rainbow Connection". The success of The Muppet Movie spawned several sequels. Fantastic poster artwork by Drew Struzan.