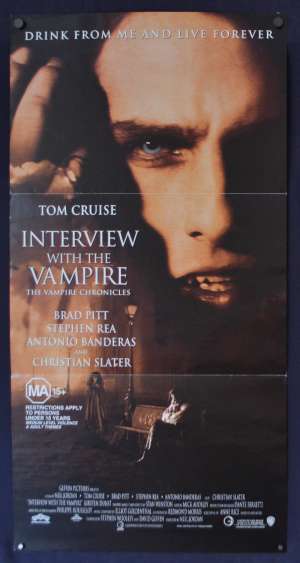 Daybill Poster.Interview with a vampire is a 1994 American drama horror film directed by Neil Jordan, based on the 1976 novel Interview with the Vampire by Anne Rice, and starring Tom Cruise and Brad Pitt. The film focuses on Lestat (Cruise) and Louis (Pitt), beginning with Louis's transformation into a vampire by Lestat in 1791. The film chronicles their time together, and their turning of a twelve-year-old girl, Claudia, into a vampire. The narrative is framed by a present-day interview, in which Louis tells his story to a San Francisco reporter. The supporting cast features Christian Slater, Kirsten Dunst, and Antonio Banderas. The film was released in November 1994 to generally positive reviews and received Oscar nominations for Best Art Direction and Best Original Score. Kirsten Dunst was also nominated for a Golden Globe for Best Supporting Actress for her role in the film.