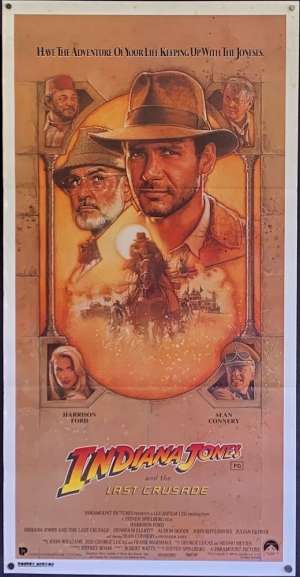 Rare Daybill Poster with Drew Struzan artwork. Indiana Jones and the Last Crusade is a 1989 American action-adventure film directed by Steven Spielberg, from a story co-written by executive producer George Lucas. Harrison Ford reprises the title role and Sean Connery plays Indiana's father, Henry Jones, Sr. Other cast members featured include Alison Doody, Denholm Elliott, Julian Glover, John Rhys-Davies and River Phoenix. Ford (who had worked with Phoenix before) recommended Phoenix for the part; he said that of the young actors working at the time, Phoenix looked the most like him when he was around that age. In the film, set largely in 1938, Indiana searches for his father, a Holy Grail scholar, who has been kidnapped by Nazis. The film was released in North America on May 24, 1989 to positive reviews and a financial success. Along the way it won an Academy Award for Best Sound Editing. 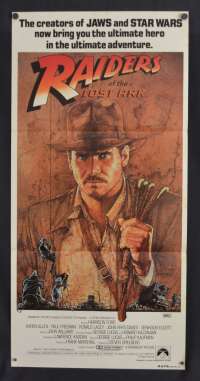