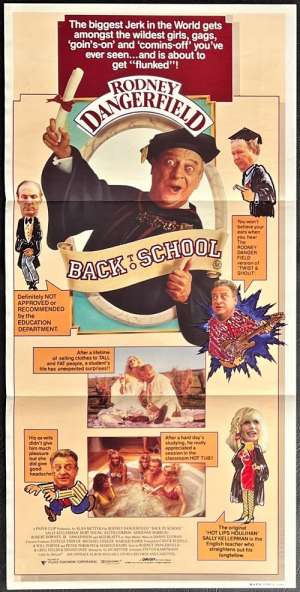 Back to School is a 1986 American comedy film starring Rodney Dangerfield, Keith Gordon, Sally Kellerman, Burt Young, Terry Farrell, William Zabka, Ned Beatty, Sam Kinison, Paxton Whitehead and Robert Downey Jr. It was directed by Alan Metter. The plot centres on a wealthy but uneducated father (Dangerfield) who goes to college to show solidarity with his discouraged son Jason (Gordon) and learns that he cannot buy an education or happiness. Author Kurt Vonnegut has a cameo as himself, as does the band Oingo Boingo, whose front man Danny Elfman composed the score for the film. Before the end credits, the message "For ESTELLE Thanks For So Much" is shown. This is a dedication to Estelle Endler, one of the executive producers of the film, who died during filming. She was Dangerfield's long-time manager, who helped him get into films such as Caddyshack. The film received positive reviews from critics, and is the 6th highest-grossing film of 1986, as well as the second highest grossing comedy film of the year.