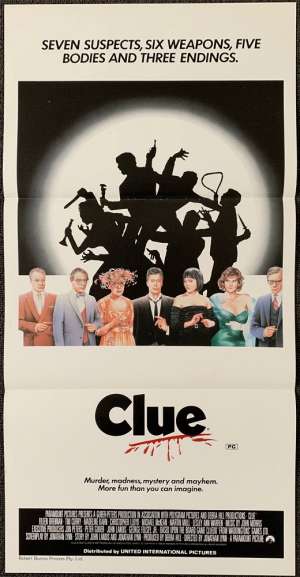 Daybill Poster.Clue is a 1985 American black comedy mystery film based on the board game Cluedo. The film was directed by Jonathan Lynn, who collaborated on the script with John Landis, and stars an ensemble cast of Eileen Brennan, Tim Curry, Madeline Kahn, Christopher Lloyd, Michael McKean, Martin Mull, and Lesley Ann Warren. Carrie Fisher was originally contracted to portray Miss Scarlet but withdrew to enter treatment for drug and alcohol addiction. The film was produced by Debra Hill. In keeping with the nature of the board game, the theatrical release included three possible endings, with different theatres receiving one of the three endings. The multiple-ending concept was developed by John Landis, who claimed in an interview to have invited playwright Tom Stoppard, writer and composer Stephen Sondheim, and actor Anthony Perkins to write the screenplay. The script was ultimately finished by director Jonathan Lynn. The film has developed a considerable cult following since its release.