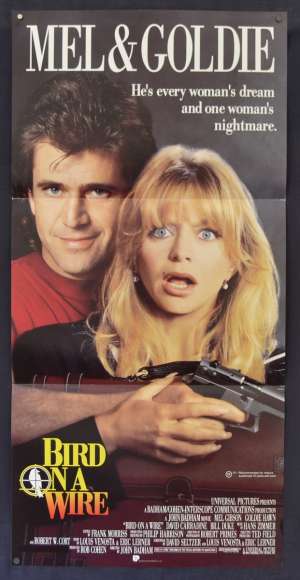 Bird on a Wire is a 1990 American action comedy film starring Mel Gibson and Goldie Hawn, directed by John Badham, and shot mainly in British Columbia, Canada. The title refers to the Leonard Cohen song "Bird on the Wire". The plot of the film was as follows: Rick (Gibson) has been given a new identity by the FBI for helping convict a drug dealing FBI agent. Fifteen years later his former fiancé (Hawn) recognises him. Rick's FBI 'minder' has been replaced by a corrupt agent who helps the drug dealing FBI agent and his accomplice locate him. There are many subsequent chase scenes as Rick and girlfriend revisit his former haunts. The alley motorcycle chase scene was filmed in Victoria's Chinatown, in Fan Tan Alley. Bird on a Wire debuted at #1 at the box office with $15.3 million and went on to gross over $138.6 million worldwide.