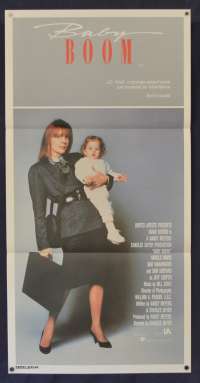 Baby Boom is a 1987 romantic comedy film directed by Charles Shyer, written by Nancy Meyers and Shyer, and produced by Meyers and Bruce A. Block for United Artists. It stars Diane Keaton as a yuppie who discovers that a long-lost cousin has died, leaving her a six-month-old baby girl as inheritance. The supporting cast included Sam Shepard, Harold Ramis and James Spader. The film was shot on location in Los Angeles, New York City and Peru, Vermont. Filming took place between November 5, 1986 and February 3, 1987. The film received favourable reviews and was a modest box-office success during its original run, eventually grossing $26 million. The film launched a subsequent television show, running from 1988 to 1989, and was nominated for two Golden Globe Awards on of which was for Keaton.