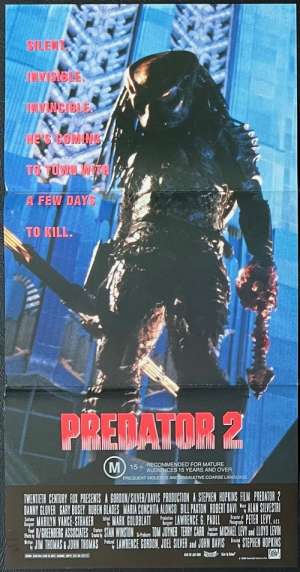 Daybill Poster. Predator 2 is a 1990 American science fiction action film written by brothers Jim and John Thomas, directed by Stephen Hopkins, and starring Danny Glover, Ruben Blades, Gary Busey, María Conchita Alonso, Bill Paxton, and Kevin Peter Hall. Due to a dispute over salary, Arnold Schwarzenegger, who starred as Dutch in the first film, declined to return to the sequel.It is the second instalment of the Predator franchise, serving as a sequel to 1987's Predator, with Kevin Peter Hall reprising the title role of the Predator. Set ten years after the events of the first film, in Los Angeles, the film focuses on the Predator, a technologically advanced alien hunter, and the efforts of a disgruntled police officer and his allies to defeat the malevolent creature. Critically, reviewers were generally impressed by the casting of Danny Glover as an action hero. Commercially, the film grossed $57million worldwide and has gone onto achieved the status of a cult classic like its predessor.