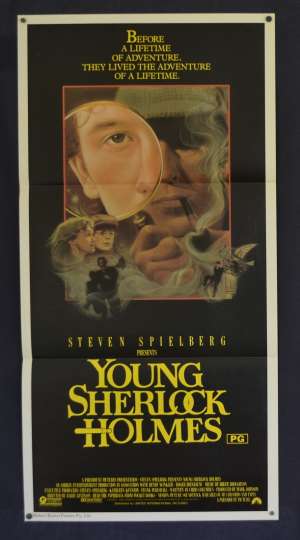 Daybill Poster.Young Sherlock Holmes (also known with the title card name of "Young Sherlock Holmes and the Pyramid of Fear") is a 1985 American mystery adventure film starring Nicholas Rowe.It was directed by Barry Levinson, Executive Produced by Steven Spielberg and written by Chris Columbus based on the characters created by Sir Arthur Conan Doyle. The film depicts a young Sherlock Holmes and John Watson meeting and solving a mystery together at a boarding school. While the film is based on characters created by Sir Arthur Conan Doyle, the story is an original one penned by Chris Columbus (Mrs Doubtfire Dir.). Though he admitted that he was "very worried about offending some of the Holmes purists", Columbus used the original Doyle stories as his guide. The supporting cast includes actors with previous associations to Sherlock Holmes including Douglas Wilmer, Peter Cushing, Patrick Newell and Nigel Stock. The film was nominated for an academy award for Best Visual Effects and won a Saturn Award for Best Music.