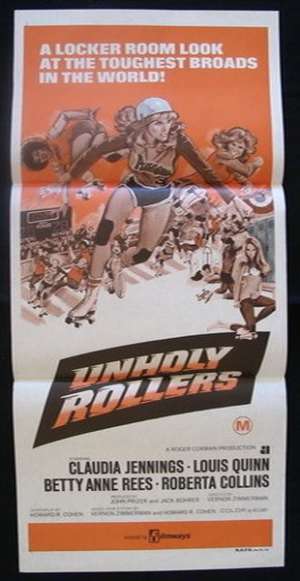 Daybill Poster.Unholy Rollers is a 1972 American action comedy film directed by Vernon Zimmerman and starring Claudia Jennings. The storyline of the film is as follows: Karen wants more action out of life and quits her job at the cannery to become a skater in the roller derby. She encounters friction from the other skaters—especially Mickey, the current star of the team. Karen proves herself a feisty competitor but refuses to be a team player. As she skates her way to stardom, she incurs the wrath of jealous team members and the owner of the team.