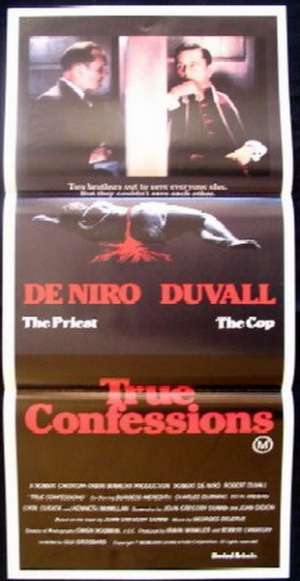 Daybill Poster.True Confessions is a 1981 American neo-noir crime film directed by Ulu Grosbard and starring Robert De Niro and Robert Duvall as the brothers Spellacy, a priest and police detective. Produced by Chartoff-Winkler Productions, it is adapted from the novel of the same name by John Gregory Dunne, loosely based on the Black Dahlia murder case of 1947. Dunne wrote the screenplay with his wife, novelist Joan Didion. The film was released on September 25, 1981. The character of Msgr. Spellacy is thought to be based on Msgr. Benjamin Hawkes, who oversaw growth of the Archdiocese of Los Angeles from the 1950s into the 1980s. Filming took place around Los Angeles in 1979, including at Echo Park, Union Station, and Alverno High School.