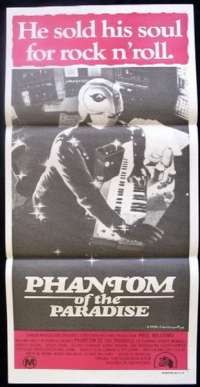 He's been maimed and framed, beaten, robbed and mutilated. But they still can't keep him from the woman he loves. Record producer Swan steals both the music and the girl (Phoenix) from composer Leach. Disfigured Leach plans revenge on Swan and his rock palace, The Paradise, and becomes The Phantom. Leach signs a contract with Swan to complete a rock opera based on the life of Faust for Phoenix. But revenge is on everyone's mind.