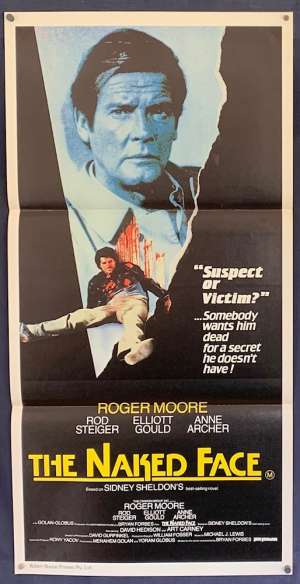 Daybill Movie Poster.The Naked Face is a 1984 American thriller film written and directed by Bryan Forbes, based on the book of the same name by Sidney Sheldon. It stars Roger Moore (James Bond), Rod Steiger (In the Heat Of The Night),Elliott Gould (Capricorn One) ,Anne Archer (Patriot Games) and Art Carney.The storyline was as follows: A Chicago psychiatrist (Roger Moore) hires a private eye (Art Carney) after being linked by a detective (Rod Steiger) to mobsters and murder. Though the film was produced and released in 1984, Sidney Sheldon wrote its source novel in 1970, before psychological profiling became a widely accepted method of forensic crime-fighting work. It was nominated for "Best Film" at Mystfest, a film festival.