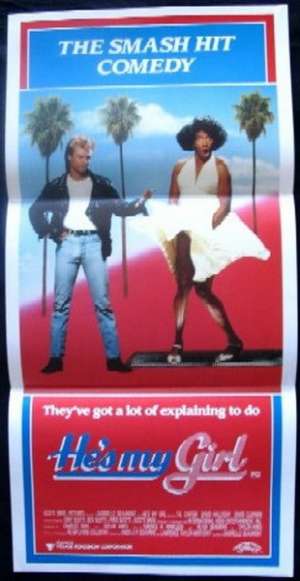 Daybill Poster. He's My Girl is a 1987 American comedy film directed by Gabrielle Beaumont and starring David Hallyday and T. K. Carter. The plot is as follows: Bryan (David Hallyday) is a singer, and his best friend Reggie (T. K. Carter) is his manager. They both reside in Missouri. In order to help advance his music career, Reggie enters Bryan into a competition to win a trip to L.A. Bryan wins, but he has to bring a girl with him. In order to go, Reggie poses as a girl. When the couple arrive in L.A., Bryan falls for Lisa (Jennifer Tilly), while Reggie falls for Tasha (Misha McK). They both find themselves pursuing their love while having to maintain their cover. Things hilariously go wrong, and they have to clear up the mess that ensues.