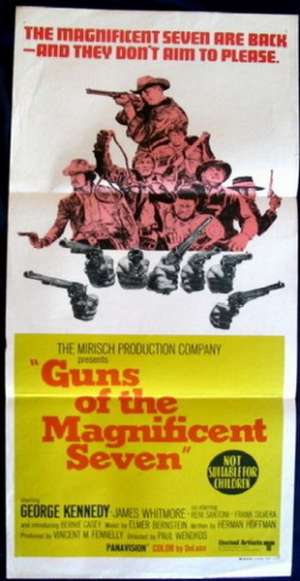 Guns Of The Magnificent Seven (1969) (also known as The Magnificent Seven 3) is a Zapata Western and the second sequel to the 1960 western film, The Magnificent Seven (itself based on Akira Kurosawa's Seven Samurai).The picture was directed by Paul Wendkos and stars George Kennedy as Chris Adams, the character Yul Brynner portrayed in the first two films. The additions to the cast to make up the "new" seven are Monte Markham, Bernie Casey (in his film debut), James Whitmore, Reni Santoni, Joe Don Baker and Scott Thomas. Each have their quirks and baggage. They band together to help free a Mexican revolutionary (Fernando Rey) and help fight the oppression of sadistic militarist Diego played by Michael Ansara. Elmer Bernstein once again provides the music. It was filmed in Spain as was the previous Return of the Seven.