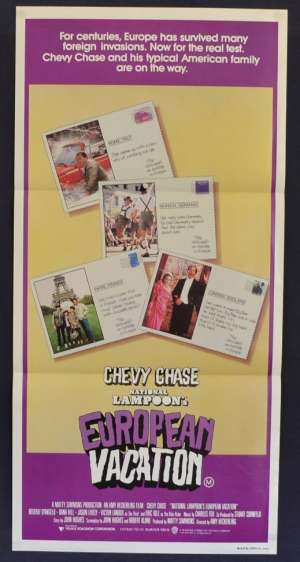 Original Australian Daybill movie poster. European Vacation (originally given the working title Vacation '2' Europe) is a 1985 American comedy film directed by Amy Heckerling and written by John Hughes and Robert Klane based on a story by Hughes. The second film in National Lampoon's Vacation film series, it stars Chevy Chase and Beverly D'Angelo. Dana Hill and Jason Lively replace Dana Barron and Anthony Michael Hall as Griswald children Audrey and Rusty. After Hall declined to reprise his role (he decided to star in Weird Science instead), the producers decided to recast both children. The film is the only installment of the series to credit the family’s name spelled as "Griswald", instead of "Griswold".