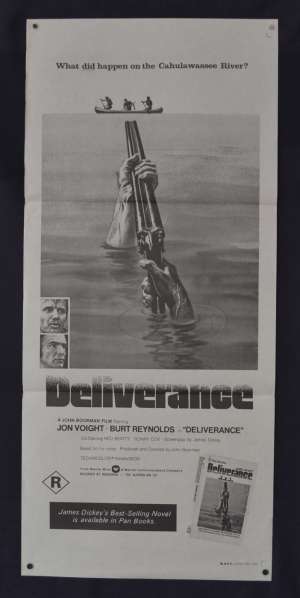 Deliverance is a 1972 American thriller film produced and directed by John Boorman, and starring Jon Voight, Burt Reynolds, Ned Beatty and Ronny Cox, with the latter two making their feature film debuts. The film is based on the 1970 novel of the same name by author James Dickey, who has a small role in the film as the sheriff, and who wrote the screenplay (uncredited).Dickey had initially wanted Sam Peckinpah to direct the film and wanted Gene Hackman to portray Ed Gentry whereas Boorman wanted Lee Marvin to play the role.Boorman also wanted Marlon Brando to play Lewis Medlock.Jack Nicholson was considered for the role of Ed,while both Donald Sutherland and Charlton Heston turned down the role of Lewis.Other actors who were attached to the project included Robert Redford, Henry Fonda, George C. Scott and Warren Beatty.The film was a critical success, earning three Oscar nominations and five Golden Globe Award nominations.It is widely acclaimed as a landmark picture.