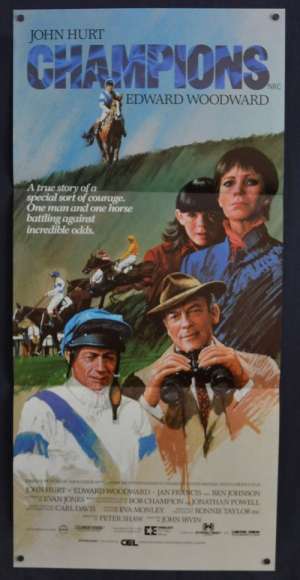 Original Australian Daybill movie poster. Champions is a 1984 film based on the true story of jockey Bob Champion. It is directed by John Irvin, written by Evan Jones, and stars John Hurt, Edward Woodward and Jan Francis.The film is based on the true story of Bob Champion (portrayed by John Hurt), who was diagnosed with testicular cancer in 1979. After treatment with an operation to remove the diseased testicle and chemotherapy, Champion recovered and went on to win the 1981 Grand National on Aldaniti. In 1985, John Hurt won an award at the Evening Standard British Film Awards for his role in the film.