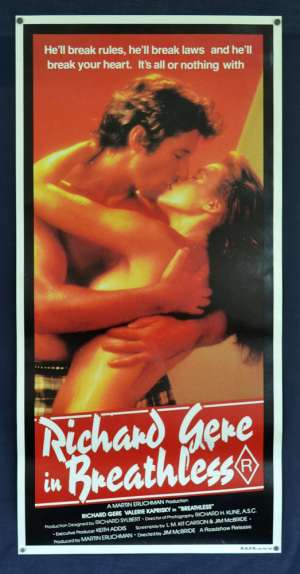 Daybill Poster.Breathless is a 1983 American drama film directed by Jim McBride and written by McBride and L. M. Kit Carson, starring Richard Gere and Valérie Kaprisky. It is a remake of the 1960 French film directed by Jean-Luc Godard and written by Jean-Luc Godard and François Truffaut, À bout de souffle (known as Breathless in English) and was released in France under the title A Bout de Souffle Made in USA. The film grossed $19,910,002 in the United States on a budget of $7 million. The film has since gained minor cult status. American director Quentin Tarantino cited it as one of the "coolest" movies.