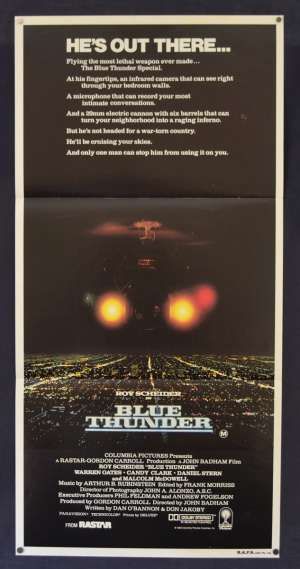 Original Daybill Poster.Blue Thunder is a 1983 action thriller film from Columbia Pictures, produced by Gordon Carroll, Phil Feldman, and Andrew Fogelson and directed by John Badham. The film features a high-tech helicopter of the same name and stars Roy Scheider, Warren Oates, Candy Clark, Daniel Stern, and Malcolm McDowell. Filmed on location in Los Angeles beginning in the early months of 1980, Blue Thunder was one of Warren Oates' last films before his death on April 3, 1982, which occurred during post-production, and the film is dedicated to him. Malcolm McDowell, who portrayed antagonist F. E. Cochrane, was intensely afraid of flying. John Badham recalled, "He was terrified. He used to get out and throw up after a flight”. Blue Thunder was a critical and commercial success. It was released on May 13, 1983. It was the #1 ranked film in the United States on its opening weekend, taking in $8,258,149 at 1,539 theaters, overtaking the previous #1 film Flashdance. The film was ranked #2 in its second and third weekends. Overall, in the US, it took in $42,313,354 for its 66 days of release.