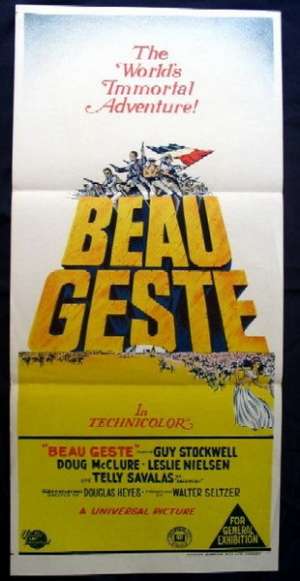 Daybill Poster.Beau Geste is a 1966 adventure film based on the novel by P. C. Wren filmed by Universal Pictures in Technicolor and Techniscope near Yuma, Arizona and directed by Douglas Heyes. This is the least faithful of the various film adaptations of the original novel. In this version, there are only two brothers, rather than three, and there are no sequences showing Beau's life prior to his joining the Legion. Filming started November 1965. It was shot near Yuma with interiors at Universal studios. The film was the last credited work of Donald Robert Overall Hatswell (born July 3, 1898 in Norwood, Surrey, died: June 29, 1976). Hatswell was a former World War One Royal Navy Officer whose collection of over 720,000 picture postcards of uniforms and medals led him to be a Hollywood movie technical advisor.Joseph Kane acted as the film's second unit director.