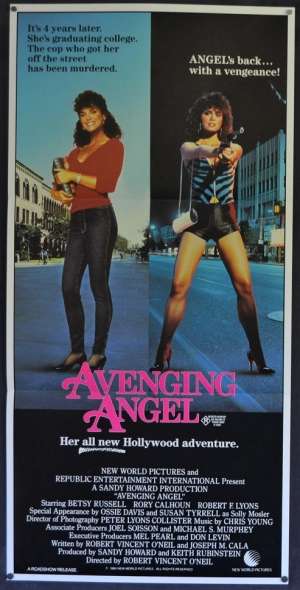 Daybill Poster.Avenging Angel is a 1985 film directed by Robert Vincent O'Neil and written by O'Neil and Joseph Michael Cala. The film is a sequel to Angel (1984) and was followed by Angel III: The Final Chapter (1988) and Angel 4: Undercover (1993). Avenging Angel went into production quickly after the success of its predecessor. Hoping to recreate the success of the first film, New World Pictures released the film on January 11, 1985, two days shy of the anniversary of the first film's release.  It was a box-office failure, as were the other two. Rory Calhoun claimed Donna Wilkes did not reprise the role she had originated because the producers refused to pay her the salary she wanted. The series has somewhat of a cult following now.