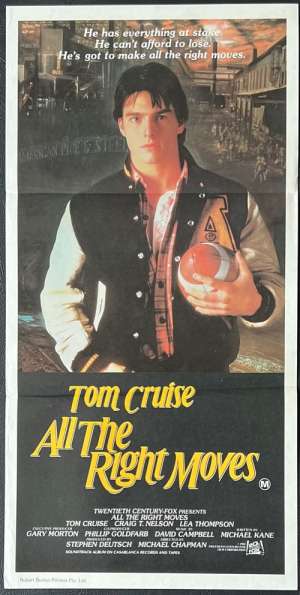 Daybill Poster.All the Right Moves is a 1983 American sports drama film directed by Michael Chapman and starring Tom Cruise, Craig T. Nelson, Lea Thompson, Chris Penn, and Gary Graham. It was filmed on location in Johnstown, Pennsylvania and Pittsburgh. The recently closed sixty-year-old high school (40.3217°N 78.9217°W), the former campus of Greater Johnstown High School, was used as the location of the film, along with Point Stadium. Lea Thompson was inserted as a new student at Ferndale Area High School for three days prior to shooting. Cruise was similarly inserted into Greater Johnstown High School, but was recognized immediately. (His only notable film part at the time was in Taps in 1981; The Outsiders and Risky Business were yet to be released.) Commercially the film was a success.