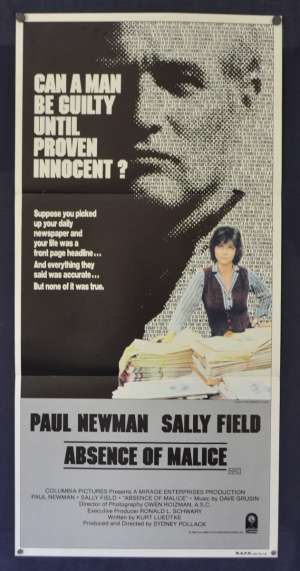 Absence of Malice is a 1981 American drama film starring Paul Newman, Sally Field, and Bob Balaban, directed by Sydney Pollack. The title refers to the legal definition of one of the requirements of proof against libel defamation, and is used in journalism classes to illustrate the conflict between disclosing damaging personal information and the public's right to know. Newman stated that the film was a "direct attack on the New York Post", which had earlier published a caption for a photo of Newman that he stated was inaccurate. Because of the dispute the Post banned him from its pages, even removing his name from movies in the TV listings. Absence of Malice received mostly positive reviews and was nominated for three Academy Awards; Best Actor in a Leading Role (Newman), Best Actress in a Supporting Role (Dillon) and Best Writing, Screenplay Written Directly for the Screen.