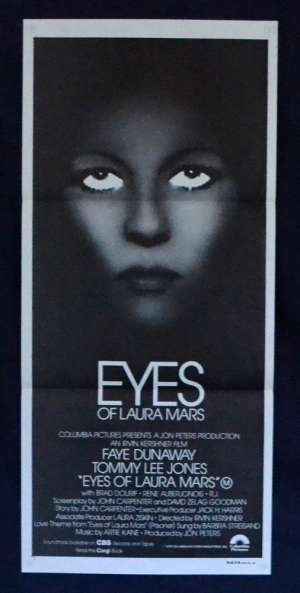 Original Australian Daybill movie poster.Eyes of Laura Mars is a 1978 thriller film starring Faye Dunaway and Tommy Lee Jones and directed by Irvin Kershner. The screenplay was adapted (in collaboration with David Zelag Goodman) from a spec script titled Eyes, written by John Carpenter, and would become Carpenter's first major studio film of his career. Producer Jon Peters, who was dating Barbra Streisand at the time, bought the screenplay as a starring vehicle for the actress, but Streisand eventually decided not to take the role because of "the kinky nature of the story," as Peters later explained. As a result, the role went to Dunaway, who had just won an Oscar for her performance in Network.Eyes of Laura Mars is said to be an example of an American version of the giallo genre. The film is also noted for its use of red herrings and its twist ending.