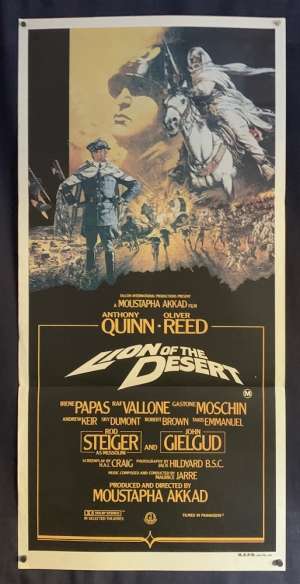 Daybill Poster artwork by Brian Bysouth. Lion Of The Desert is a 1981 Libyan historical epic war film about the Second Italo-Senussi War, starring Anthony Quinn as Libyan tribal leader Omar Mukhtar, a Bedouin leader fighting the Regio Esercito (Italian Royal Army) and Oliver Reed as Italian General Rodolfo Graziani, who attempted to defeat Mukhtar. Also starring was Rod Steiger, Sir John Gielgud and Irene Papas. It was directed by Moustapha Akkad and funded by the government under Colonel Muammar Gaddafi. Released in May 1981, the film has received positive reviews from critics. The musical score of Lion of the Desert was composed and conducted by Maurice Jarre, and it was performed by the London Symphony Orchestra. The film was banned in Italy in 1982 as it was considered to be damaging to the honour of the army in the eyes of the then prime minister. It eventually was shown on pay TV in 2009.