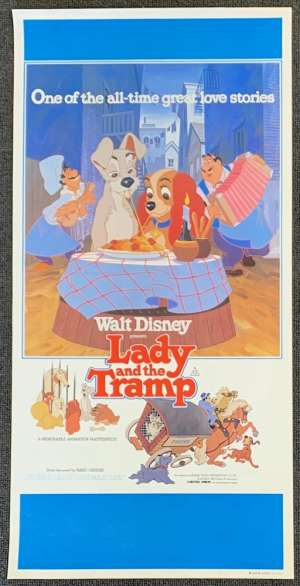 Rare Rolled Daybill Poster.Lady and the Tramp is a 1955 American animated romantic musical comedy-drama film produced by Walt Disney and released to theatres on June 22, 1955 by Buena Vista Distribution. The 15th Disney animated feature film, it was the first animated feature filmed in the CinemaScope widescreen film process. Based on Happy Dan, The Whistling Dog by Ward Greene, Lady and the Tramp tells the story of a female American Cocker Spaniel named Lady who lives with a refined, upper-middle-class family, and a male stray mongrel called the Tramp. When the two dogs meet, they embark on many romantic adventures and fall in love. The film was an enormous success at the box office and has since gone on to become regarded as a classic. The sequence of Lady and Tramp sharing a plate of spaghetti — climaxed by an accidental kiss as they swallow opposite ends of the same strand of spaghetti is considered an iconic scene in American film history.