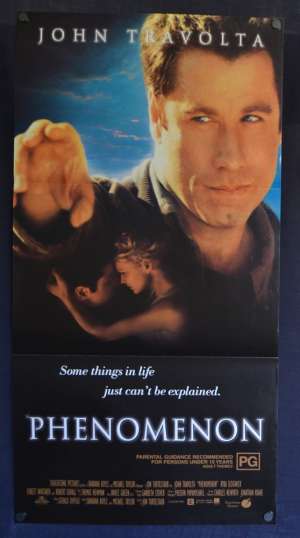 Phenomenon is a 1996 American romantic fantasy drama film directed by Jon Turteltaub, written by Gerald Di Pego, and starring John Travolta, Kyra Sedgwick, Forest Whitaker, Robert Duvall, and Jeffrey DeMunn. In the film, an amiable, small-town everyman is inexplicably transformed into a genius with telekinetic powers. The original music score was composed by Thomas Newman. The film grossed more than $16,000,000 on its opening weekend, debuting in third position and later climbing up to second. It finally grossed $104,636,382 in the US and $47,400,000 elsewhere, grossing approximately $152,000,000 overall. Travolta and Whitaker both won a Blockbuster Entertainment Award for their performances in 1997. Whitaker also received an Image Award. In the same year the film was nominated for a Saturn Award. Travolta was nominated for an MTV Movie Award for his performance, as well as for Best Kiss with Kyra Sedgwick. Eric Clapton was nominated for his song "Change the World" and won an ASCAP Award and the BMI Film & TV Award. Thomas Newman also received a BMI Film & TV Award for the score.