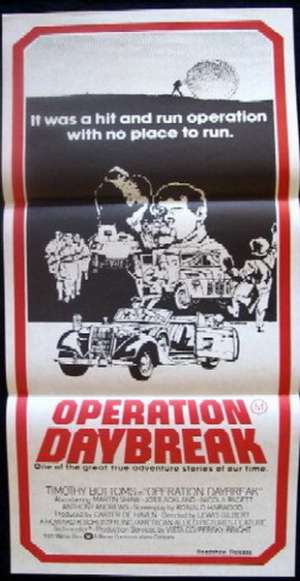 Daybill Poster.Operation Daybreak (also known as The Price of Freedom in the US) is a 1975 Second World War film based on the true story of Operation Anthropoid, the assassination of SS General Reinhard Heydrich in Prague. Starring Anthony Andrews, Timothy Bottoms and Martin Shaw, it was directed by Lewis Gilbert and shot mostly on location in Prague. It is adapted from the book Seven Men at Daybreak by Alan Burgess. This movie was one of the few productions (besides several made in Russia and Yugoslavia) who took the time and the effort of duplicating WW2 German Tiger tanks.